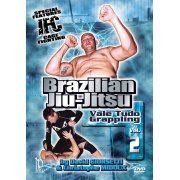 After the success of the previous series of videos on Brazilian jiu-jitsu and Vale Tudo, instructor David Giorsetti is back with two exceptional new volumes on techniques with and without kimonos that will show you how to be more efficient in Competition Brazilian Jiu jitsu, Grappling or Vale Tudo. In this new DVD series, besides competition, demonstrations, and interviews footage, David hosts great champions such as Christophe Midoux (his training partner and a French Vale Tudo heavyweight Champion). To this day, David Giorsetti has a number of amazing titles: Rickson Gracie French Cup Winner in 1997; European Cup Winner in 1998; French Cup Winner in 1999; Pan-American Games Vice-Champion in 2000; French Cup Winner in 2002; Ultimate Grappling Winner in 2002. Christophe Midoux shows you several of his favorite free fight combinations. Techniques are also performed by the Brazilian champion with whom David regularly trains, Ari Galo, who is an instructor at the Carlson Gracie Academy in Rio de Janeiro. So, if you want to improve your fight techniques on the ground, or to know more about locks, chokes, turn over, do not miss either volume in this fabulous new DVD series. Languages: French – English – German – Spanish – Italian; Extra Features: Techniques, demonstration and extra fights (R.Gracie – C.Midoux – D.Giorsetti – M.Villela) – Trailers.