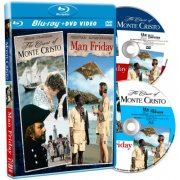 Count of Monte Cristo: Alexander Dumas' classic tale of injustice, revenge and retribution, in which Edmond Dantes (Richard Chamberlain) is falsely accused of conspiring with Napoleon! Prosecuted by De Villefort (Louis Jourdan), he is sentenced to life on an isolated island fortress, called Monte Cristo. After being told of a treasure, Dantes escapes to find the treasure while assuming the identity of the rich and revered Count of Monte Cristo! Man Friday: Daniel Defoe's classic story of survival and heroism takes on a whole new perspective in this 1975 version of Robinson Crusoe. Marooned on a beautiful South Seas island with a black man whom he names Friday (Richard Roundtree), Crusoe (Peter O'Toole) declares himself 'master' and throws Friday into a cave to be his slave. Friday soon escapes and leaves Crusoe, and Crusoe soon discovers that he needs Friday's companionship