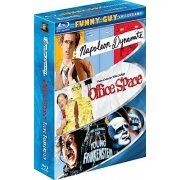 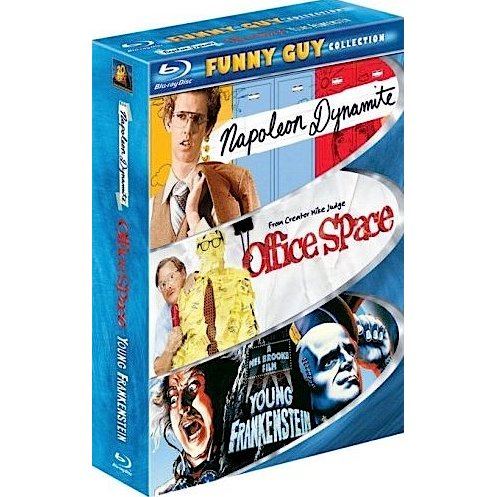 Napoleon Dynamite (2004): Napoleon Dynamite is a new kind of hero, complete with a tight red 'fro, sweet moon boots, and skills that can't be topped. Napoleon spends his days drawing mythical beasts, duking it out with his brother, Kip, and avoiding his scheming Uncle Rico. When two new friends enter Napoleon's life – shy Deb and mustachioed Pedro – the trio launches a campaign to elect Pedro for class president and make the student body's wildest dreams come true. But if Pedro is to beat stuck-up Summer, Napoleon will have to unleash his secret weapon…

Office Space (1999): Unable to endure another mind-numbing day at Initech Corporation, cubicle slave Peter Gibbons (Ron Livingston) gets fired up and decides to get fired. Armed with a leisurely new attitude and a sexy new girlfriend (Jennifer Aniston), he soon masters the art of neglecting his work, which quickly propels him into the ranks of upper management! Now the stage is set for Peter to carry out a high-tech embezzling scheme that's sure to mean the end of his job and a one-way ticket to easy street. Can he pull it off before all corporate hell breaks loose?

Young Frankenstein (1975): Mel Brooks' monstrously crazy tribute to Mary Shelley's classic pokes hilarious fun at just about every Frankenstein movie ever made. Summoned by a will to his late grandfather's castle in Transylvania, young Dr. Frankenstein (Gene Wilder) soon discovers the scientist's step-by-step manual explaining how to bring a corpse to life. Assisted by the hunchback Igor (Marty Feldman) and the curvaceous Ings (Teri Garr), he creates a monster (Peter Boyle) who only wants to be loved.