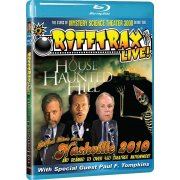 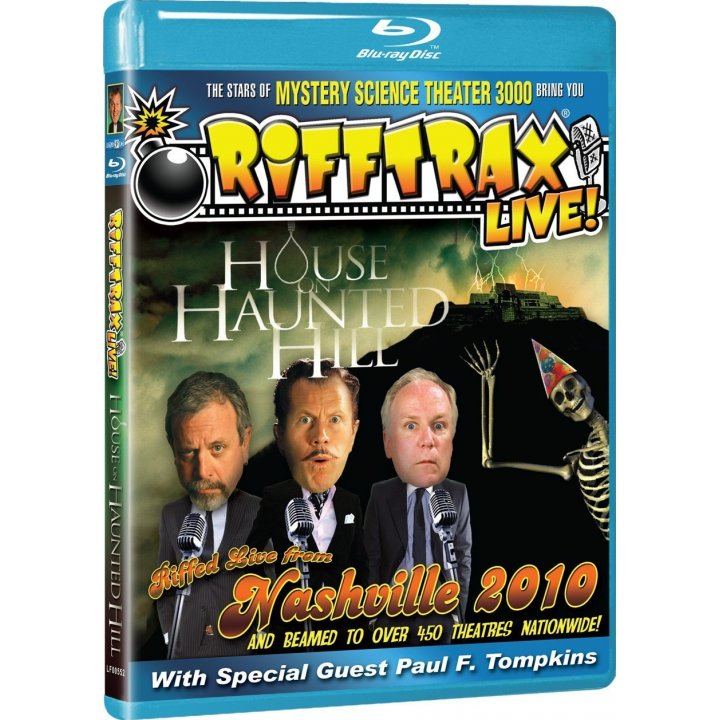 Is there any possible downside to accepting an invitation from Vincent Price to spend an evening in a creepy mansion that was built on something called 'Haunted Hill?' If so, Mike Nelson, Kevin Murphy, and Bill Corbett of Mystery Science Theater 3000® fame couldn't find it! In fact they were so eager to join Mr. Price and his terrifying mustache that they riffed the film live, on-stage, and now you can reap the rewards from the safety of home with this Live show DVD! Yes, horror classic House on Haunted Hill provides a mesmerizing walk down 'people actually used to find this scary?!?' lane. Join the RiffTrax® guys as they bring their special brand of rapid-fire comedic commentary to every skeleton-hanging-from-visible-wires, clumsy sexual overtone, and a stunningly inept test pilot whose 'heroics' typically lead him to bloody his own nose after locking himself in a broom closet! The guys are joined by guest riffer Paul F. Tompkins, comedy person extraordinaire and quite a snappy dresser to boot! They also riff two vintage, never-before-seen shorts live on-stage: Paper and I, in which a small boy is haunted by a talking paper bag, and Magical Disappearing Money, about a supermarket witch whose main concern is that you don't spend too much on rice. No, seriously, that's what they're really about! Join Mike, Kevin, Bill and Paul for an unforgettable All Hallow's Eve of mind-melting comedy!