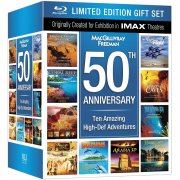 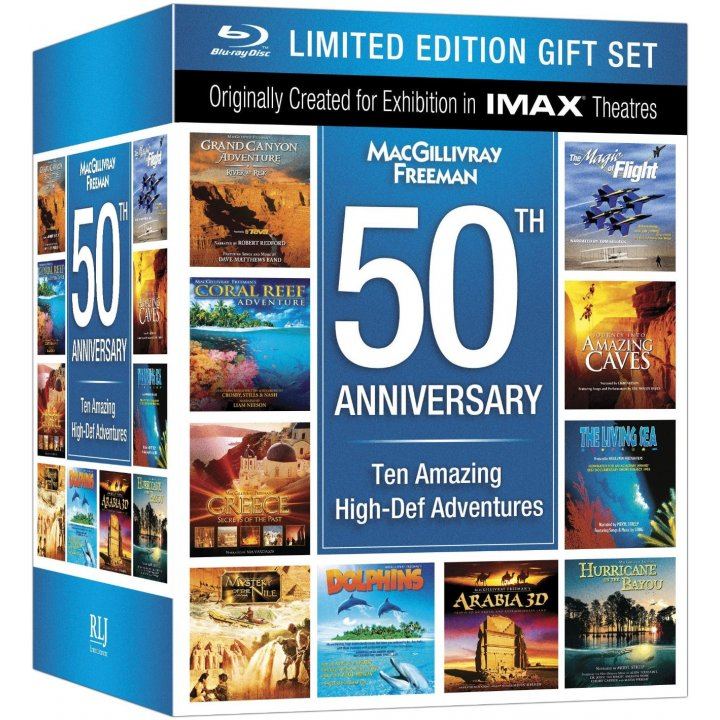 50 YEARS OF GROUNDBREAKING FILMMAKING. In celebration of MacGillivray Freeman Films' 50th anniversary, this very special limited edition box set includes 10 of their most awe-inspiring adventures in spectacular high-definition. Includes 10 Giant-Screen Adventures: MYSTERY OF THE NILE (2005, 47 Min) Join a team of explorers on the expedition of a lifetime as they set off to become the first to navigate the Blue Nile from source to sea. ARABIA (2010, 40 Min) With breathtaking cinematography, go deep into the heart of this exotic land to experience the great mystique of Arabia. Also includes 3D version! CORAL REEF ADVENTURE (2002, 46 Min) With Jean-Michael Cousteau, deep reef scientist Richard Pyle and Fijian diver Rusi Vulakoro, they explore and capture on film the dazzling underwater world of coral reefs, magical places here on Earth. DOLPHINS (2000, 41 Min) Brimming with details about the complex lives of these fascinating animals, this ocean adventure film takes you into the very heart of the world of Dolphins. GRAND CANYON ADVENTURE: RIVER AT RISK (2008, 45 Min) Join environmental advocates Robert F. Kennedy, Jr. and Wade Davis as they set out with their daughters, traveling deep into the Grand Canyon and down the river that runs through it. GREECE: SECRETS OF THE PAST (2006, 45 Min) The magic of ancient Greek civilization comes to life in a giant screen adventure! Travel to the dawn of democracy and the birthplace of Western Civilization on a quest to uncover the buried secrets of one of the world's most enlightened societies. HURRICANE ON THE BAYOU (2007, 42 Min) Against the poignant backdrop of the most costly natural disaster in America's history, cameras follow a group of four musicians, as they explore the electrifying culture of New Orleans. JOURNEY INTO AMAZING CAVES (2001, 40 Min) Join Dr. Hazel Barton and Nancy Aulenbach as they travel to unique and forbidding ice caves in Greenland, underwater caves in the Yucatan, terrestrial caves in the Grand Canyon and other spectacular locations. THE LIVING SEA (2003, 39 Min) The Living Sea takes you to the world's oceans, traveling to Palau, Hawaii, California, Oregon, Alaska, Nova Scotia and the Red Sea. THE MAGIC OF FLIGHT (1996, 40 Min) Relive the historical first flight of the Wright Brothers in 1903, then soar with the world-famous Blue Angels as they defy the laws of gravity with their most breathtaking maneuvers.