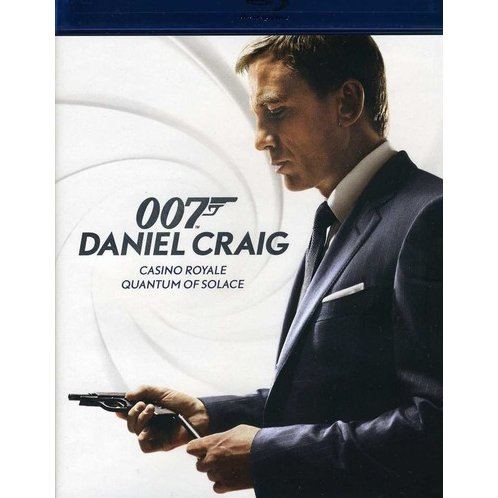 Quantum of Solace Betrayed by Vesper, the woman he loved, 007 (Craig) fights the urge to make his latest mission personal. Pursuing his determination to uncover the truth, Bond and M (Dench) interrogate Mr. White (Christensen) who reveals that the organization which blackmailed Vesper is far more complex and dangerous than anyone had imagined.

Casino Royale Casino Royale introduces James Bond before he holds his license to kill. But Bond is no less dangerous, and with two professional assassinations in quick succession, he is elevated to "00" status.
Bond's first 007 mission takes him to Madagascar, where he is to spy on a terrorist, Mollaka (Sebastien Foucan). Not everything goes to plan and Bond decides to investigate, independently of MI6, in order to track down the rest of the terrorist cell. Following a lead to the Bahamas, he encounters Dimitrios (Simon Abkarian) and his girlfriend, Solange (Caterina Murino). He learns that Dimitrios is involved with Le Chiffre (Mads Mikkelsen), banker to the world's terrorist organizations. Secret Service intelligence reveals that Le Chiffre is planning to raise money in a high-stakes poker game in Montenegro at Le Casino Royale.