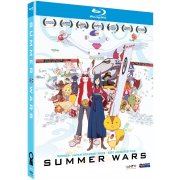 An adolescent math wiz unintentionally plunges the virtual world into chaos by solving a numerological riddle that makes the global network vulnerable to attack in this animated sci-fi adventure comedy. When Natsuki asks Kenji to pose as her boyfriend at her grandmother's upcoming birthday party, the smitten young numbers man jumps at the opportunity. But his summer of romance takes an unexpected turn when Kenji receives a complex math riddle on his cell phone, and solves it without a second thought. In the process, however, Kenji breaches the security of Oz, an extensive virtual realm containing everything from online shopping records to sensitive government documents and even the codes to launch nuclear weapons. Later, when a malicious AI program dubbed Love Machine begins gathering all of this data and threatens to bring the entire information infrastructure to its knees, Kenji, Natsuki, and her family must figure out a way to clear up the mess before it plunges the planet into chaos.