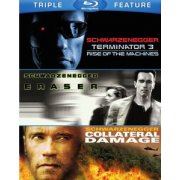 A decade has passed since John Connor (NICK STAHL) helped prevent Judgment Day and save mankind from mass destruction. Now 25, Connor lives "off the grid" – no home, no credit cards, no cell phone and no job. No record of his existence. No way he can be traced by Skynet – the highly developed network of machines that once tried to kill him and wage war on humanity. Until, out of the shadows of the future steps the T-X (KRISTANNA LOKEN), Skynet's most sophisticated cyborg killing machine yet. Sent back through time to complete the job left unfinished by her predecessor, the T-1000, this machine is as relentless as her human guise is beautiful. Now Connor's only hope for survival is the Terminator (ARNOLD SCHWARZENEGGER), his mysterious former assassin. Together, they must triumph over the technologically superior T-X and forestall the looming threat of Judgment Day – or face the apocalypse and the fall of civilization as we know it.

Arnold Schwarzenegger stars as Eraser, an elite federal marshal who "erases" the pasts of jeopardized informers and relocates them into safe anonymity.Now, he alone must protect a moving target (Vanessa Williams) who stands to uncover a conspiracy that could shift the balance of power in the world forever. Armed with a high-tech arsenal and his strategic brilliance, the Eraser races to stay ahead of the forces closing in and to expose the shattering truth.

Arnold Schwarzenegger delivers nail-biting excitement and bold one-man heroics as a Los Angeles fireman who seeks revenge after his wife and son are killed in a terrorist bombing. Schwarzenegger tracks the man responsible from Colombia to Washington, D.C. in a race to stop the terrorist before he strikes again. 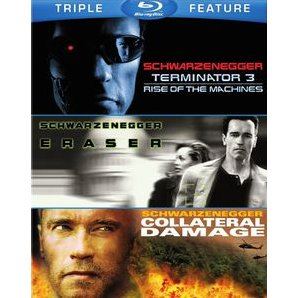