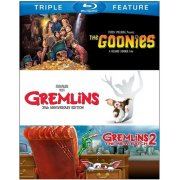 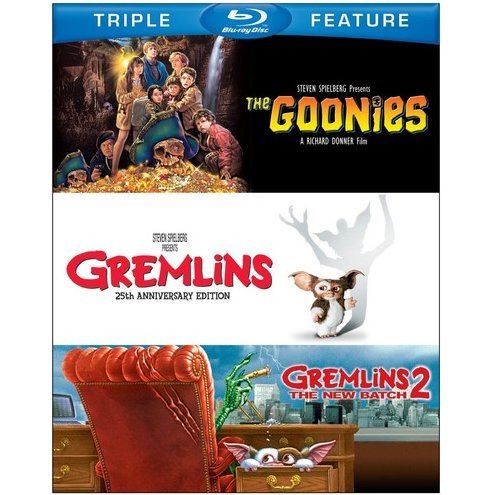 The Goonies From the imagination of Steven Spielberg, The Goonies plunges a band of small heroes into a swashbuckling, surprise-around-every-corner adventure. Following a mysterious treasure map into a spectacular underground realm of twisting passages, outrageous booby traps and a long-lost pirate ship full of golden doubloons, the kids race to stay one step ahead of a family of bumbling bad guys…and a mild-mannered monster with a face only a mother could love.Gremlins Gremlins is a wildly original roller-coaster ride of hilarious mischief. One minute your hair will stand on end, the next you'll hold your sides with laughter at the havoc these supposedly gentle fur balls create when the rules surrounding their care and feeding are inadvertently broken one fateful Christmas. Written by Chris Columbus and directed by Joe Dante, Gremlins unleashes special effects that dazzle and enchant and merriment that lingers in the memory.Gremlins 2: The New Batch The rules are the same but the laughs are bigger and the thrills are better. This time, Billy and everyone's favorite Mogwai, Gizmo, must face off against a new batch of Gremlins that definitely think New York is their kind of town.